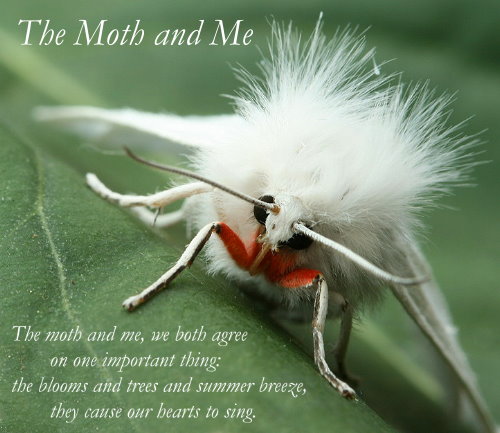 Here it is, a tad late! I am visiting my parents this weekend, and ran into internet trouble. I’m sure that Murphy has a cousin who is responsible for the inevitability that if you have a deadline on something computer-related, there will be some sort of issue that will prevent you from meeting that deadline. It seems to happen to me too often for it simply to be coincidence. Or perhaps you just notice and remember those occasions more than the times where something happened but you weren’t up against any pressing deadlines. Or where you were up against a deadline but nothing happened.

Regardless, here it is now! Spring is moving along at breakneck pace here in the north, and the moths are really beginning to appear in numbers. A good warm night can see the sheet covered in small furry bodies, and the trap stuffed with exciting things.

Just recently, for instance, I’ve started seeing the big silk moths and sphinx moths out flying in the evening, and have even turned up a few in the trap, such as the stunning male Io Moth above. I’ve posted a few of my most recent catch over at my own blog.

In the southern hemisphere, the season is wrapping up. Back in April, when moths were still fairly abundant, Duncan of Ben Cruachan blogged about some of the variety of moths he was seeing in his local patch of Victoria, Australia, and invited readers to join the obsession.

If Ben’s moths weren’t enough to hook you, swing by BunyipCo to check out an assortment of awesome Tiger Moths of Queensland, Australia. Although the stereotypical North American tiger moth is striped peachy-orange and black like its namesake, they actually come in a great variety of colours and shapes.

In another part of the continent, William at Esperance Fauna shares his encounter with a Southern Old Lady Moth, a large, lovely fawn-coloured species.

If you want a really big moth, though, head over to Ugly Overload for a Giant Wood Moth. At 3.5″ long it’s a good thing it’s a docile moth.

Also on Ugly Overload, someone sent in a great head-on macro shot of Eupackardia calleta, the Calleta Silkmoth, a native to the North American southwest. Although a very stunning species in ordinary encounters, it does have a very evil look to it in this photo.

Speaking of no-do-gooders, Susannah of Wanderin’ Weeta, in British Columbia, had a difficult time getting a photo of her fugitive moth, an Indian Meal Moth, that slipped in with her dried goods.

Though the mothing season may be picking up for some, for The Moth Man things are still slow in his garden in Ontario. He shares with us a couple of loopers that were one of just a handful of species to grace his trap so far.

This is the time of year where the large and eye-catching silk moths start flying. Unsurprisingly, they’re a popular subject in the blogosphere right now, and most especially the large, soft green Luna Moth. Darlene of Dirt Road Heaven, Karen of World of Karen, Daisy of Ananda, and artist Sheila Thornton all share their encounters with this beautiful moth.

Of course, the Luna is not the only silk moth to be catching eyes; at Elfspeak the blogger shares a Polyphemus Moth found at her porch light one evening. Shortly after, she finds a female at her work.

Over at Moonraking in Indiana, the author shares the story of some silk moths raised by his daughters’ preschool class. The teacher has been breeding them and sharing them with the class, and his daughters got to bring two home.

In southern California, “Vanessa” of Am I Bugging You Yet? discovered a Large Yellow Underwing, a fairly common species found across much of the continent, which popped out of a small bush during a search for mantids.

In Illinois, Doug at Gossamer Tapestry also had a daytime encounter with a diurnal moth; his was an Eight-spotted Forester (check out those orange leggings).

From a bit further south, Martin of Nature in the Ozarks shares his sighting of a Hollow-spotted Plagodis (the spots are not see-through, and the origin of the common name is unclear).

On the other hand, Hummingbird Clearwing moths really do have clear wings, as Aydin of Snail’s Tales shows us using a dead individual found on the sidewalk of a shopping centre in Maryland.

Another sphinx moth appears on the blog of Desert Survivor, who was graced by many White-lined Sphinx Moths visiting the flowers of her garden in the American southwest.

Julie Zickefoose was on a birding trip in West Virginia when she came across a mudpuddling group of Pipevine Swallowtails – and a Nessus Sphinx, which joined the butterflies in looking for the minerals in the mud.

Moving across the pond to England, the blogger behind Tidelines found a Poplar Hawkmoth along a path in a Yorkshire seaside town.

Somewhere further down the shore, Leew of Yorkshire Coast posts a couple of photos of two species of carpet caught in the moth trap one night.

Robert of Robert Laughton Bird Photography doesn’t have any photos of carpets (though he did catch some), but does share a great variety of other interesting species from his trap in Bristol. Included among these are some great Puss Moths, large, striking black-and-white moths.

Some really great photos of Puss Moths can be found over at Mostlymacro, where Dean posts a series following the moth from caterpillar to adult. Included is a series that shows the wings expanding after emergence from the cocoon; it’s amazing they can grow so much!

Another assortment of photos is presented by Tony at St. Margaret’s at Cliffe Photo Diary, though he and a commenter note that mothing has been slow recently.

Also lamenting the low abundance of moths was Steve of North Downs and Beyond, but he shares a Light Brocade with the observation that “even a ‘duff’ year can produce the goods at a local level”, and offers the encouragment to “keep on keeping on”.

That’s it for this edition of The Moth and Me. Get your submissions for the next one in to me by June 13 at sanderling [at] symbiotic [dot] ca. In the meantime, get out there and get mothing! For us northern hemisphere-ers, we’re just starting to head into the best part of the year!

This entry was posted in moths and tagged moths, The Moth and Me. Bookmark the permalink.